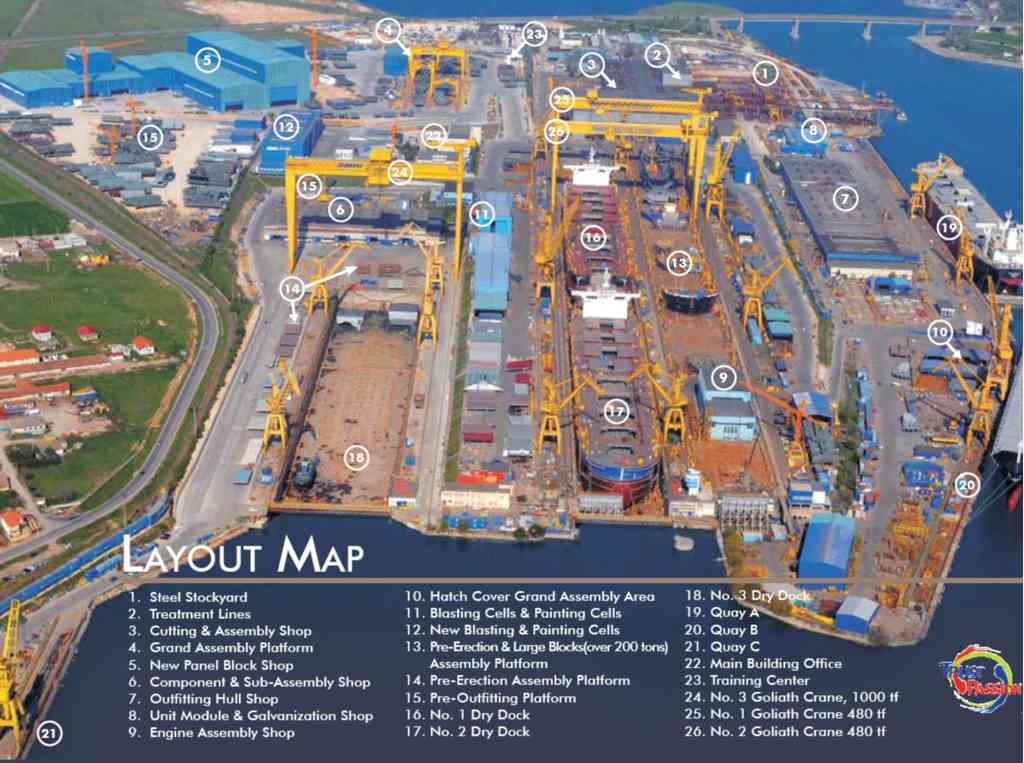 Damen Shipyards Mangalia is located on the Black Sea coast of Romania and is a joint venture between Damen and the Romanian Government with Damen responsible for the operational management of yard. Mangalia is the largest shipyard in the Damen portfolio and its integration into the group opens up the possibility of Damen constructing and converting larger and more complex vessels than was previously possible, with particular emphasis on RoPax ferries, cruise ships, big offshore vessels and offshore structures. The management team led by Chris Groninger is now working on optimizing the yard for its new rebuild focus, as well as expanding its repair and maintenance client base and developing an offshore construction capability. The yard occupies a single site of nearly one million square metres and has 1590 metres of quayside. Three dry docks range in size from 302 by 48 metres to 360 by 60 metres with craneage to match. It has a comprehensive range of skills and workshops on site for newbuild and repair projects including high capacity steel and painting facilities. The yard was originally known as 2 Mai Mangalia Shipyard and began building new ships in 1976. In 1997 Daewoo-Mangalia Heavy Industries S.A. took control of the yard and changed the focus to building large container ships, bulk carriers and tankers. In late 2017 Damen acquired Daewoo’s shareholding and in the summer of 2018 took operational control.more

We have not received a review so far.

Located in the Black Sea area, Santierul Naval Constanta SA is ranked among the largest new-buildings and ship-repairs yards in Europe, the world's 3rd place shipbuilder for medium range products & chemical tankers. Accessible by sea through the Bosphorus Strait and by river through Danube – Blac ...

Bulyard Shipbuilding Industry AD is the largest shipbuilding enterprise in Bulgaria. The company designs, constructs and repairs ships up to 100 000 DWT. Over 850 vessels for owners of 27 countries have been built for the over one-hundred years long history of the shipyard. The product portfolio c ...

Relying on our solid base, excellent organization, highly-qualified personnel and rich experience, we have established as one of the leading shiprepair yards in the Black Sea and Eastern Mediterranean area. Odessos Shiprepair Yard S.A. is the largest and best equipped Bulgarian shipyard for docking ...

We are motivated team of 700 professionals with considerable experience in the industry, working for satisfaction of our customers already for 25 years! We offer personal approach to our clients, flexibility, experience, technical and commercial reliability because We Care for every single custome ...